Home
About
Get There
Tickets

By String Theory Schools (other events)

WE STILL HAVE TICKETS. TICKETS WILL BE SOLD AT THE DOOR FOR THE EVENTS

International Opera Theater brought 16 children from Philadelphia (ages 7-17- none of whom who had ever studied or spoken Italian) and 1 basso cantante from London to share “AZA'IO” (a 1 act lyric children’s opera) based on an original fantasy tale by Karen Saillant and Christian Bygott and translated into Italian by Maestro Antonio Fava. The classical Celtic music for AZAIO is written by Philadelphia composer, David Matthew Brown. Sustainable costumes are made by Chinese fiber artist, Qiang Gung. Surreal sets are constructed of recycled water bottles collected from various cafes and citizens throughout Citta' della Pieve and its environs for the world premiere and collected from throughout Philadelphia and transformed into a surreal set by the students at String Theory School for the American premiere. Karen Saillant is musical and stage director.

“AZAIO” celebrated the 450th birthday of William Shakespeare and the 180th anniversary of the death of English author, ardent exponent of The Bard: Samuel Taylor Coleridge, best known for his epic poem, “The Rime of the Ancient Mariner”- a tale which implores us all to cherish our flourishing earth.

The Background:
During The Renaissance, all well-educated children were thoroughly acquainted with the literary classics. In order to develop their imaginations and inspire empathy, even boys were asked to memorize and recite the aggrieved heroine's speeches from mythology shared in “Heroides” the work of the great Roman poet, Ovid.  Ovid was Shakespeare's favorite poet and as such, Shakespeare drew entire sections from his works, as in referencing them, he was able to more deeply impact the imagination of his classically astute audience.

But what if children no longer experienced intimate relationships with the heroes and heroines of the classics? What if their imaginations were no longer stimulated by great works of literature? What if they did not learn to be empathetic and compassionate?

The Story:
It is sometime in the near future. The bridge to AZAIO, the land of dreams and imagination, that secret place inside each one of us which connects us to our creativity, has crumbled from disuse. The children who live in this land (yes, we believe that characters actually “live”, especially those from the imagination of great poets like Ovid, Samuel Taylor Coleridge and William Shakespeare) once in constant rapport with youth in the real world, are now forgotten, or unknown- characters such as the oppressed and doomed Mariner from Coleridge's “Rime”, the terrorized small son of the jealous King Leonte of Sicily from ” Il racconto d'inverno”, the Ovid adoring Lucius, grandson of “Titus Andronicus” and Marina, sea born and abandoned daughter of “Pericles” who longs with all her heart to one day meet her father.

The Fates, from “Macbeth”, create a storm. This tempest elicits The Mariner (antihero from Coleridge's poem) to AZAIO. The Mariner is to be given one last chance to save himself from eternal LIFE IN DEATH and free himself from the eternal recounting of his heartless killing of an albatross. Unbeknownst to him, he could also save AZAIO and in so doing, reopen the gates to creativity once again.

In order to do so, a prophecy must be fulfilled. The Mariner must acquire the ring of Marina. He must also convince her, and the son of a king, to sacrifice their lives. With this accomplished he will be set free from his curse and be able to die in peace.

The desperate Mariner begins to tell his tale for what he hopes will be the last time. Suddenly, he is met with a revelation- one that will change his life and the life of the children in AZAIO, as well as those in the real world, forever. 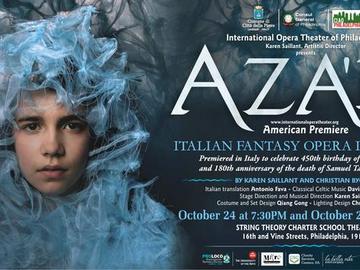 There is no food or drinks premitted in the theatre at all times. No flash photography. Please refrain from using all electrionics.

other events by this organization